The Church of England in Ceylon came into being with the establishment of British rule in Sri Lanka and the Diocese of Colombo comprising the whole island was formed in 1845. At the centenary celebrations of the Diocese in 1945 a resolution moved for creation of a second diocese to enable better pastoral care of its congregations and more effective mission of the Church. Thus began the Diocese of Kurunagala in 1950 with Rt. Revd. Lakdasa de Mel as its first Bishop.

Situated in the centre of the country like the yoke of an egg surrounded by the Diocese of Colombo tretching from North to South about 300 km and from East to West about 100 km where the Church Missionary Society (CMS) of the Church of England had begun work earlier, namely the ancient Sinhala Kingdoms; some Tamil speaking upcountry plantation congregations where the Tamil Christian Mission (C.T.M.) had worked and a few English speaking urban parishes. The Diocese had valued the multi ethnic character which it inherited and endeavoured to bring a closer integration of ethnic groups giving Tamil language its due place thus making the Church's contribution towards ethnic harmony in a country torn asunder with ethnic conflict.

Vision of the Forebears

The Country had gained political independence two years prior to the establishment of the Diocese. Rapid political, social and religious changes began taking place with resurgence of Buddhism and National Culture.

Far sighted leaders of the Church with prophetic vision discerned the signs of the times. They realized the need to forfeit privileges enjoyed under colonial rule, for a transition from a Western to an indigenous ethos of the Church and change of attitude to other faiths and their adherents. Thus Debates of an earlier era gave way to dialogue and exclusion to co-existence. This helped to dispel misunderstanding and foster better relationship with persons of other faiths. The consecration of the new Cathedral build on indigenous architecture in the "Buddha Jayanthi" year bears witness to this. This process begun by Bishop Lakdasa De Mel was continued by Bishop Lakshman Wickremesinghe his successor making his own unique contribution in the fields of ethnic harmony and social justice. Subsequent clerical and lay leadership built upon these foundations.

Beginning with a handful of clergy and limited financial resources work has expanded under God's Grace during the past 58 years of its history like the mustard seed in the parable Jesus recounted. Increase seen in full time Church workers, Church structures and parishes with House Churches in remote areas. Evolving on local leadership and their involvement in the decision making process and administrative structures of the Diocese. New ventures began to cater to the spiritual and material needs of the people. Among them are the following:

Devasarana and Devasevikaramaya to uphold the Diocese through their community devotional life and embarking on new spheres of service to the community necessitated by the political and social changes in the country.

Improving religious and education in Sunday Schools and Day Schools through the setting up of a Board of Religious Education. Developing Social Service Projects for children initiated during the missionary era eg. Evelyn Nurseries in Kandy and House of Joy Talawa for girls; St. John's Kegalle and Christodaya Kurunagala for Boys.

Regular programs for youth provided through Parish Youth Fellowships and the Diocesan Youth Movement have equipped them to meet modern day challenges. New Social Service ventures like Christodaya, K double I, Bishop Lakshman Wickremesinghe Centre and Bishop Lakdasa Foundation providing training in skills have catered to the spiritual needs and unemployment problem of the young.

Programmes for men and women to build up their spirituality through Worship, Bible Study Groups, Seminars are organized at parish and diocesan levels. Adults are made sensitive to current theological and social issues through Diocesan Committees such as Theological, Liturgical, Peace and Justice, Environment and Medical Ethics.

Developing Leadership among clergy and Laity

Programmes organized in Managerial skills and exposures here and abroad making use of links with the world wide church. 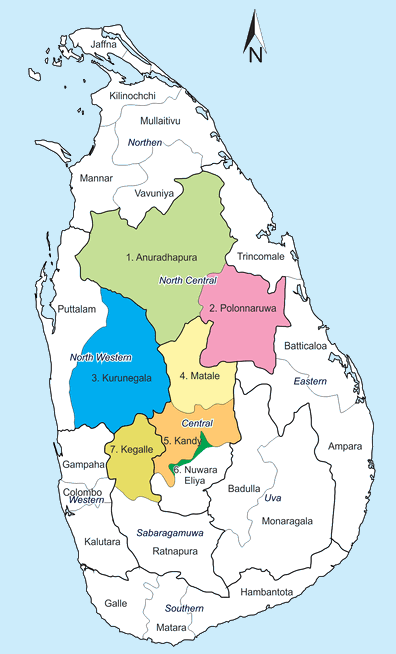 The geographical map of the Diocese of Kurunagala

To serve the people of God and the body of Christ with utmost commitment, love, with true discipleship and to witness for His incarnation, death and resurrection.

We acknowledge that all this is the Grace of God and that we have nothing that is not from God. In this gratitude we set our wills to fulfill the work of representing the One, Holy, Catholic and Apostolic Church so that the people of this land will find a new spirituality and true community in the new creation. We pray that the life and witness of our church contribute to the wider life and witness of the Church of God in Sri Lanka, Asia and the world: and that this in turn will lead all people to the truth in God.